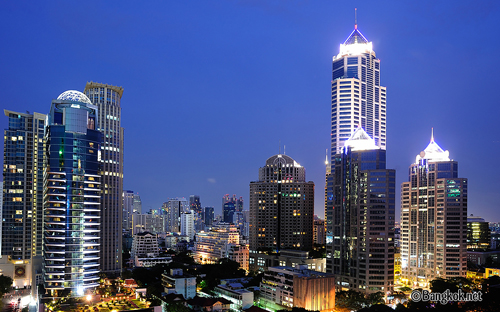 Bangkok’s office spaces maintained their high level of occupancy in Q2 (second quarter) with prices being forced up due to limited supply, according to Knight Frank Thailand (property consultant).

Knight Frank Thailand Research claims that in Q2 of 2016, Bangkok office spaces had a 92.1% level of occupancy, with prices rising due to limited supply. Having said that, developers have reacted accordingly, with close to 288,000 sqm of office paces scheduled to be introduced in the Thai market over the next few years.

The supply of office spaces in Bangkok stood at a staggering 4,723,862 sqm in Q2, a net addition of about 28,705 sqm from Q1; a by-product of the two new buildings launched recently – The Metropolis (Sukhumvit Soi 39) and M Tower (Sukhumvit Soi 62).

So far, as of Q2, all new office buildings introduced to the Bangkok market lie outside the CBD, however all are still located in regions that are now being recognized as emerging business sub-districts in their own right, much like the mid-Rama IV and mid-Sukhumvit areas.

With regards to demand, further research has uncovered that the grand total of occupancy for Bangkok office spaces stood at a favourable 4,350,130 sqm or 92.1% of the market’s total supply, representing the most amount of occupied office space in recorded history. The Grade-A category noted a small amount of decline in occupancy, particularly in non-CBD regions, but this was the result of a rise in supply rather than a fall in demand for office spaces.

Overall, the rate of occupancy in the Thai office market in Q2 had shrunk by 0.2% (quarter-on-quarter basis) but rose by 1% (year-on-year basis). The non-CBD Grad-A office market showcased the strongest occupancy growth rate of 4.8% (year on year).

When comparing the two i.e. the change in demand to the change in supply over the past couple of periods, it was noticed that for a majority of the periods in the past 4 years, occupied office spaces were much greater than an increase in their supply. Thus far in 2016, this period marked only the second time since the year 2012 that supply of new office spaces outgrew take-ups.

The average going rate of office space rentals in Q2 was 726 THB per sqm per month which depicted a 2.2 % quarterly growth from the previous quarter average of 711 THB. The increase in asking rent over the same period in 2015 was 7.6%.