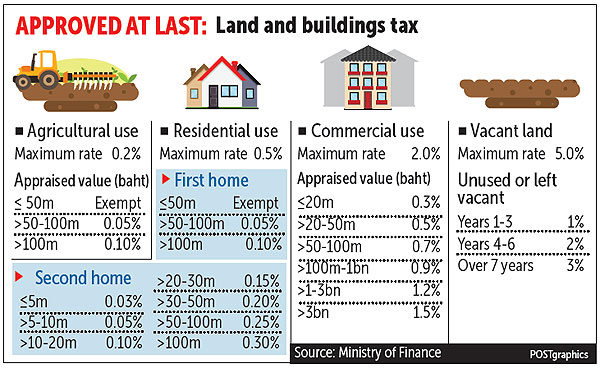 At long last, Bangkok’s land and buildings tax that had won the cabinet’s approval is believed to be the driving force that will help generate above 64 billion THB for government coffers next year, when it is put into motion.

According to Apisak Tantivorawong, Thailand’s Finance Minister, 50 million THB is expected to arrive from agricultural land, 4 billion THB from residences and 60 billion THB from commercial land. All of this income will be repurposed for local development.

This new tax is put together to help expand the base of the national taxpayer, especially with regard to asset-based taxation, with a target to heighten tax collection efficiency among narrow income disparity, local organisations and better land utilisation nationwide.

This bill sets ceiling rates of 0.5% of the value of appraisal for residential purposes, 0.2% for agricultural purposes, 2% for commercial purposes and 5% for undeveloped or vacant land.

This tax will be levied on land used for agricultural purposes and first homes with appraisal prices initiating at 50 million THB; the rate being applied only on amounts exceeding 50 million THB.

Owners of farms and first homes that have an appraisal price of below 50 million THB will be exempted liability from this tax.

This tax will also be levied on second homes progressively, with 0.03% to 0.30% rates for homes that have an appraisal value below 5 million THB to those having more than 100 million THB.

For undeveloped or vacant land, the tax rate will be levied at 1% for land that has been left unused or vacant for a period of 1 to 3 years, 2% for 4 to 6 years and 3% for upwards of 7 years.

According to Thailand’s Finance Minister, Mr Apisak Tantivorawong, there are around 8,556 residential units having an appraisal value of more than 50 million THB, mostly located in the city of Bangkok and other similar big cities, which means that about 99.96% of residences across the country are exempted from this tax liability.

As an attempt to minimise public opposition, land and buildings tax was done away with many times. Now that it will be finally approved, this tax will replace all existing land, local and house development taxes.

The Housing Business Association president, Atip Bijanonda has exclaimed that house taxation tabled at 50 million THB or higher would have very little impact on a majority of homeowners, as this pricing section accounts for below 10% of the country’s total.

Colliers International Thailand associate director of property consultant, Surachet Kongcheep, has also stated that the minimum price of a house influenced by the tax of 50 million THB need not be a cause for alarm. Explaining himself further, he said that if on the contrary, the tax was set at 10 million THB or more, the cause for concern would be much higher as the section of 10 million THB or more accounts for 30% of the country’s total.