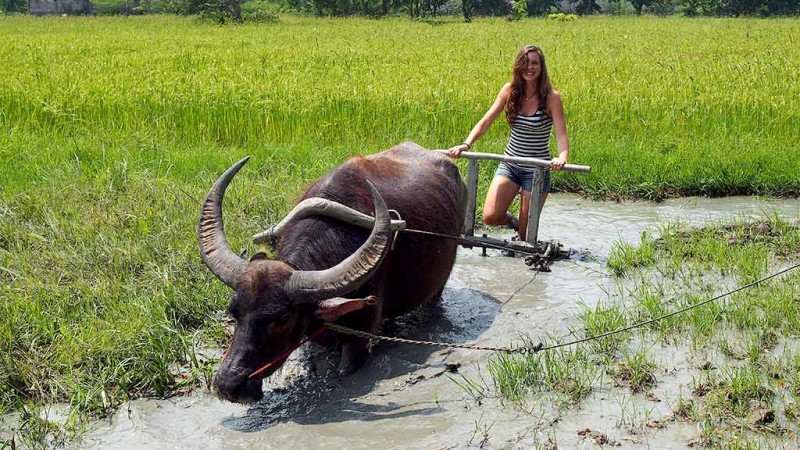 The local tourism authority in Thailand’s southern province of Trang has come up with an unusual project that involves using their local buffalo’s to lure tourists to Pig Island or Koh Sukorn.

Koh Sukorn, which means ‘pigs’ in Thai, is not a place where you will actually find pigs due to the high number of Muslim inhabitants. However, tourists will definitely see over 300 buffalos here. As a matter of fact, no other island in the Trang province uses buffalos to plough their fields and or for nutrition (its meat) like the Sukorn inhabitants do.

The local authorities have arranged an audience with the residents and the representatives of the Sukorn Tambon Administration Organization in order to submit the proposal to make use of buffalos with the intention of attracting more tourism.

The Buffalo is a symbol of Koh Sukorn and there is no doubt that they ought to be used to promote tourism in the island, stated the president of the city council, Somchai Jearanaisilp.

The majority of tourists use motorcycles to move around Pig Island, however, the local authorities believe it would be a lot more pleasing for tourists to use buffalo-pulled carts.

Dr. Somchai claims that the local authorities are planning to have the Suphan Buri Buffalo Village personnel teach the buffalos how to interact and be sociable with visitors. Apart from that, vets from the Rajamangala University will take care of the animals to ensure they are in good health.

The island of Koh Sukorn is in the Palian area away from the shoreline of Trang.

There are a number of speculations regarding the origin of the island’s name. One theory suggests that a man of Muslim origin who was travelling to Trang by boat ran into a Buddhist girl and fell for her. She decided to follow him on his sea adventure and they got married later on.

Once the Buddhist girl’s parents found out that their daughter was coming back to Trang, they decide to honor them with some grilled pork. When the boat docked in Trang, the girl’s parents got annoyed with her and the girl consequently didn’t want to see her parents. Feeling irate, the parents tossed the pork into the ocean and it washed ashore an island that was thereafter known as Koh Sukorn or Pig Island.