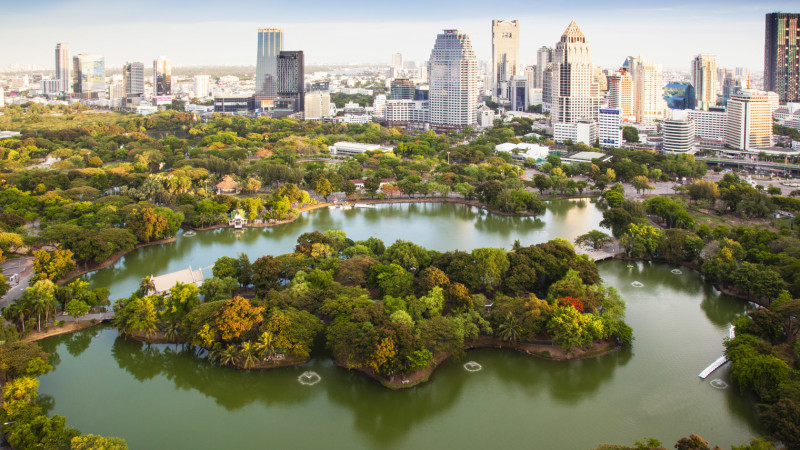 The Rise In Demand For Public Space In Asian Cities

There are some ambitious projects being development in the city of Bangkok, none of which are commercial, residential nor retail in nature. These are, on the contrary, open green-public spaces.

According to JLL, a similar situation has been witnesses throughout Asia as city dwellers and governments take more interest in the enhancement and development of the area’s public spaces.

Not too long ago, Phase 1 of the expansion of Benjakitti Park opened, which added in excess of 60 rai worth of green spaces of area that was formerly occupied by the Thai Tobacco Monopoly. Upcoming expansion phases plan to cover another 360 rai worth of public space and park land over the next couple of years.

Another park being built this year is the Centennial Park by Chulalongkorn University to commemorate its 100 year anniversary. Once complete, central areas of Bangkok will boast of 28 rai worth of new green space available for recreational-public use joining Rama IV Road to the south with the Siam Square area.

Another park projected to be completed next year is the Phatumwananuruk Public Park, which is a 40-rai strong park being constructed behind Central World, bang opposite Khlong Saen Saeb.

In accordance with Andrew Gulbrandson, the head of consulting and research at JLL Thailand, future and ongoing planned green space projects in Bangkok city will without a doubt have a favourable impact on the ability of one to live in the city. He went on to state that, these green spaces will create a more attractive and healthier environment for visitors, the business community, and residents alike.

The Donghu Greenway is being built in Wuhan, China. This involves the revitalization of 33 KM2 of area constituting the Donghu Lake, which is China’s largest urban lake. Once open to the public, it will have open parks, be car-free, and will include spaces for education and culture.

The research head for JLL in Southeast Asia and Singapore – Chua Yang Liang states that in up and coming Asian cities, policies can have a massive impact in demarcating areas fit for public use. It is only now that these cities are starting to witness the value of possessing more organized and planned green spaces integrated into the urban fabric of their cities. They are seeing it as a pre-requisite of their urban solution.

For example, Surabaya in Indonesia, is a city wherein rapid expansion has led to a rise in land prices and a booming property market. Having maximised spaces inside homes, local residents now rely heavily on public spaces. Among these public spaces is the Bungkul Park, which is a 15,000 M2 space that boasts of an amphitheatre, jogging paths, children’s playground, fountains, and also free WiFi.

Older cities like Mumbai and Manila face different hurdles. Many of them have already gone through overdevelopment and therefore have been forced to retrofit additional public spaces into their existing designs. This is the reason why it’s very difficult for policies to generate the impact they seek in older cities.

For example, Seoul, has transformed a busy highway into a walkway that is landscaped to perfection in the city’s heart, which now plays host to more than 60,000 visitors a day.

Asia also has plenty of POPS (privately owned public spaces) that are usually owned by developers and are however open to the general public, these include commercial plazas and malls.

With urbanisation leading to higher land demands and denser cities, the pressure is on to maintain and create public spaces.

A handful of Asia’s biggest cities are generating solutions by taking a communal approach like crowdsourcing ideas. For instance, the Urban Redevelopment Authority in Singapore runs a competition called ‘Ideas for Public Spaces competition’ each year, while Malaysia has constructed an annual culture and arts event called ‘Urbanscapes’ that depicts Kuala Lumpur’s creative communities and public spaces.

Developing such spaces, especially green spaces, is just a start. To become long-term commitments these require non-stop funding to help keep them fit for use. The majority of hurdles are in maintaining them and ensuring that these public spaces are always kept clean, Mr Chua Yang Liang concluded.

For people and the cities they live in, the benefits of open green spaces can outweigh their costs, by improving the environment, raising the quality of life and encouraging the creation of a prosperous and thriving society.